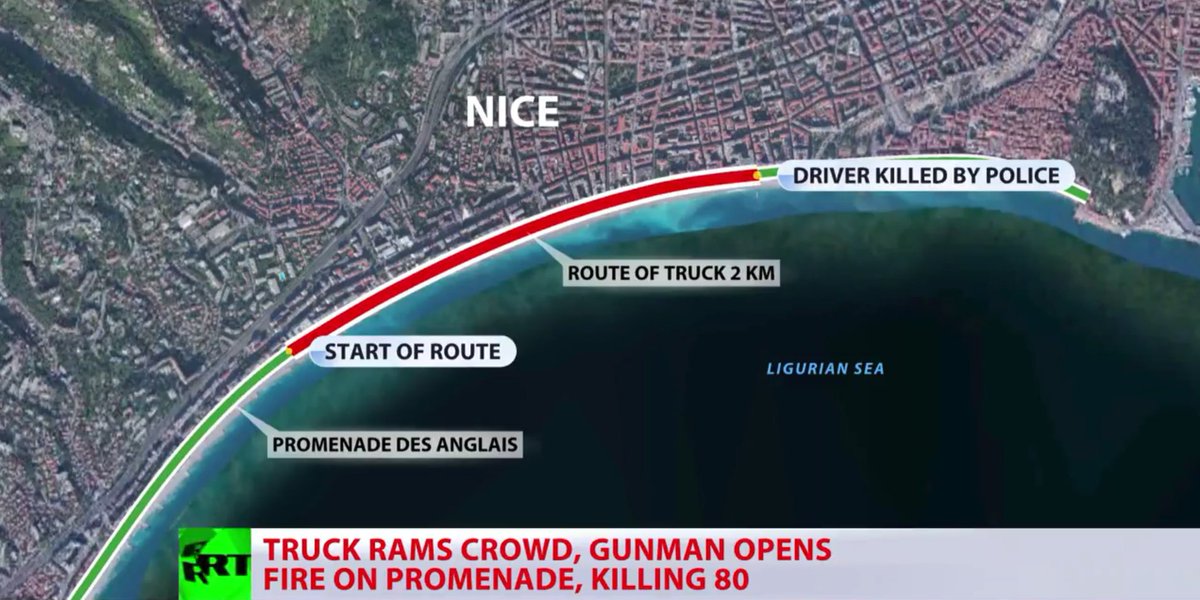 Murder weapon: The key suspect is said to have been parked up for nine hours before carrying out the attack and may have been stopped by police but claimed he was delivering ice cream. In fact the back of his lorry contained many weapons and grenades

Horrifying: Police and forensics teams inspect bodies in the French sunshine where at least ten died - many of them in buggies left abandoned today

Terror investigation: The French authorities say it is their third terrorist atrocity in 18 months and admit it could take some time to identify all the dead

Atrocity: At least a dozen bodies of victims covered by sheets remain at the scene of the terror attack today as the authorities try to identify them

United in grief: Parents of victims embrace each other near the scene of a truck attack in Nice where more than 80 were killed

Path of destruction: After spending several hours parked up the killer went on a half hour rampage along the world famous Promenade des Anglais in Nice before he was shot dead by a hero policewoman

Bereft: A shocked woman in yellow sits on the phone next to the body of a loved-one, surrounded by debris, as ISIS terrorists again struck in France, this time on Bastille Day, killing at least 84

Alone: A man sits in silence and clasps his hands while sitting at the head of a body killed in France's third major terrorist attack in 18 months

Shootout: Police approach the cab where the gunman went on his rampage. It is not clear if this was taken as he was killed or beforehand

Shootout: After zig-zagging through crowds the terrorist leapt out of his bullet-ridden lorry and fired on crowds before a police marksman shot him dead

Aftermath: This photograph was taken in the moments after the lorry crashed through crowds of people in the devastating terror attack

Panic: People were seen running for their lives after a suspected terrorist drove through crowds of people celebrating Bastille Day then got out and opened fire

Horror: Bodies are still strewn along the mile-long route as police admitted today that the man who killed them was known to them

Monstrous act: A man lies next to a body, with his head in his hands, as he tries to come to terms with the horror of what happened

Death toll: At least ten people lie dead on a short stretch of road where the lorry flew through crowds in Nice, killing families on a national holiday

Overwhelmed: Paramedics help a stricken victim on the left side of the picture, on the right hand side a man crouches, clearly in tears over the body of a victim

Makeshift: As the death toll rose bodies were left were they were hit or shot and were covered in blankets and often weighed down with whatever was available including rocks from the beach

Stunned survivors stood just feet away from from the bodies of five people who were run over next to HiBeach in Nice, pictured

Path of destruction: The driver spent around 30 minutes on the road before he was stopped by a police marksman in a shoot-out

Carnage: The killed zig-zagged across the road trying to hit as many people as possible, including several children killed as they watched the fireworks

Investigation: Police in France are now treating this as a terrorist attack and have admitted the killer was known to them and is believed to be from Nice via Tunisia

Horror: Witnesses described seeing bodies of the dead being sent flying in all directions or being jammed under the wheels of the lorry

Terrible: One of the dozens of people killed by the killer lorry driver lies covered on the pavement with her handbag still next to her

Panic: Emergency services were working through the night to treat people in the street where they lay or in local hospitals. Doctors are begging for people to donate blood to help the injured

Icon: The sweeping promenade of Nice with its famous twinkling street lights. Today this famous scene is at the centre of one of France's worst terror attacks

In shock: Three survivors of the terror attack cling to one another as they try to come to terms with what happened and pass the body of someone whose life was taken

Heartbroken: Two men stand next to bodies, with one on a mobile phone, as many families lost loved-ones in the terror attack last night

Grief: A woman sobs into her hands while another man holds on to the body of someone killed by the ISIS terrorist

Awful: Friends of a man lying badly injured on the pavement try to treat him as he lies stricken on the floor with no shoes

Tragedy: A family of holidaymakers look at a woman in yellow as she sits next to the body of a loved-one killed in the terror attack

Support: People refuse to leave the side of the dead and injured while others walk dazed along the promenade after surviving the attrocity

Rush: Victims have been rushed to hospital for life-saving treatment but dozens remain critically ill and more are expected to succumb to their injuries

Emergency: Paramedics and doctors try to save a life of an injured victim - surrounded by bodies of those killed yesterday